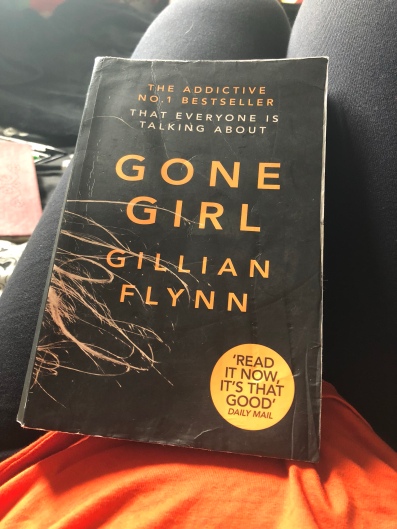 Flynn does it again with yet another page-turning, tense thriller. However, is Gone Girl just another psychological thriller or is this a story about the ‘battlefield of a true marriage’? Is it about two people being barricaded by their love for one another? Call me heartless, but I am pretty sure Flynn used Gone Girl to show us the ‘truth about marriage’ at an insane exaggeration. We delve into the couples’ true feelings for one another and we never actually learn the exact outcome. I personally do not know how I feel about any of the characters.

My reason for reading Gone Girl is because… how can you not? Gone Girl since released was so popular and released everywhere because of Flynn’s two other successful novels. I could not get away from Gone Girl in the stores, on social media, in the cinema… it was a must read. The excitement over one book was amazing. I was even stopped on the way home from university on the bus because some woman wanted to know what I thought of the novel so far!!!

Gone Girl is the ‘addictive’ bestseller. Split into three sections, the novel tells the intriguing story of a couple who hate each other so much, they will do anything to be apart, before realising they’re better off together. Gone Girl has won awards such as, the Goodreads Choice Award for best mystery and thriller. Flynn always executes a classic thriller novel. She has such a talented skill of nailing the conventions of a thriller on the head and still include a plot twist that intrigues us to read on. It is hard to master a good thriller without the plot twist being entirely obvious. Flynn’s writing something I aspire to.

So, lets talk about what this novel seems to lack. We know it is a bestselling thriller and 2/3 of the novel are brilliant and I would read again. Let’s discuss characterisation, as mentioned before, I am not sure how I feel about any of the main characters. We start with Nick Dunne, we already establish that he is not happy and to top it all off, his wife is missing, and the police suspect him. He begins as our ‘hero’, then as his secrets are revealed I started to dislike him. Then we learn the truth about Amy and almost feel sorry for him and then see Amy’s story and hate him again. As a reader I can’t keep up with how I feel so I just decide to hate him.

Amy Dunne, ‘Amazing Amy’ is not so much better. Amy is so dislikeable as a character, I never actually like her. She seems to hate every single female in the book and does not seem to be bothered she has no friends. The whole irony of her being so ‘perfect’. I almost feel sorry for the characters such as Desi and Noelle because they believe her lies and become attached to the façade that is ‘Amazing Amy’ just like we begin to at the beginning.

So, we are left with two central characters that I do not like, the audience do not like, they do not like each other… so what is the point? What are we reading on for? What do we want to happen? We do not even know the truth in what is happening within the novels because we do not and cannot trust either one of our narrators. The book itself is a good book, a page turner and an intriguing read. The end… is not. As mentioned before we do not trust any of them and for the two characters to just end up together ‘loving’ or ‘hating’ one another, is just some kind of sick ending joke OR it is not actually true, down to our unreliable narrators. IS there something they are not telling us? Yes, it could be one big example of ‘marriage is like a prison sentence’ but such a good enticing thriller to end in such a mediocre way was disappointing. I was so disappointed and annoyed to find them back together, I expected at least one of them to die! The whole novel almost seems pointless because they end up together. It is almost as if Flynn decided their biggest punishment was for them to be together. Sometimes an ending does not need to be told, but I feel this one was something we could have endured.

The film adaptation is fantastic! If you have not seen the film, go and watch it! It is very similar to the novel. Not a lot of the novel is cut out into the film, so you can watch your favourite chapter and check out another person’s view of that chapter. However, the film, like the novel, is quite graphic so beware if you are queasy. The chapter with Desi is not for the faint hearted!

I did enjoy the contrast of the two characters. Flynn’s writing is, as usual, quirky and easy to read. The twist mid-novel is the strongest section of the novel. Although I started with doubts, I believed Amy had died. The beginning is very telly and is shorter paced, but it is worth it for us to understand the set up. I was just let down by the obscure ending. Throughout the novel my mind was bursting with bizarre questions. I wanted to just know what the truth was, ironically because the narrators do not tell the truth!!!